The term, "Non-verbal communication skills" has been getting a number of hits lately on this blog, so I thought it would be a good time to put up a sample on using body language in the sales call (particularly when making presentations or demonstrations) from my little book, SALES PRESENTATIONS & DEMONSTRATIONS.

Today, in this post, for reasons of space I'll be pulling only a short section from Part Three.  I hope the visuals on non-verbal movements  and subtle communication tips come through

clearly on your reader.

Alas, it is not always easy translating from print or even an E-book to web-page format, so bear with me if some of the fonts or visuals come out a bit strange.

To order Sales Presentations & Demonstrations for immediate E-book delivery, or in paper edition

HERE'S THE SAMPLE, FROM PART THREE

(c) Michael McGaulley.  All rights reserved. The license is for limited, and does not allow republication in any form without written permission from the author.

Your overall purpose in giving a demonstration or presentation is, of course,  to communicate—that is, to communicate your ideas TO the Prospect, and to comprehend and respond to the communication feedback that comes FROM the Prospect.

We tend to think of communication as primarily a matter of words. But those who study this field find that only around 7% of the messages  transmitted during face-to-face communication are carried by the words that are said.

Put differently, 93% of the messages back and forth are conveyed non-verbally, by signals such as facial expressions, eye contact or the lack of it, posture, hand gestures, movements, coming forward to or drawing back from the other person, voice tone, and other subtle mannerisms.

If, as a salesperson, you’re able to read the Prospect’s non-verbal signals, you gain extremely valuable insight into what he or she is really thinking.

But, conversely, you also need to be aware not only of what your words are saying, but also of the signals that your voice tone, facial expressions, posture, mannerisms, and the like are sending back to the Prospect.

For example, if you fail to maintain good eye contact, the Prospect may—  perhaps subconsciously—  feel that you are not trustworthy or not telling the complete truth about your product.

Similarly, if your  gestures are too quick and choppy, the Prospect may interpret that as nervousness.

It goes without saying, therefore, that a very important part of your preparation before getting your early demonstrations is to do some dry runs in front of a video camera so that you can see what the Prospect sees.

Section A.  Non-verbal techniques for communicating TO Prospects

In communicating to the Prospect during the demo or presentation, two areas are particularly important:

1.  The personal image which you project.  (Unless your Prospect sees you as professional and reliable, your efforts may be largely wasted.)

2.  The way in which you are able to focus the Prospect’s attention where it should be.

Let’s look at each of these in turn.

The phrase “projecting an image” has some bad connotations, suggesting doing phony things in order to manipulate people.

We don’t mean it that way.  Rather, the point is to avoid those small mannerisms and habits that can distract, and hence cause sales presentations and demonstrations to flop.

Presenting a presentation or demonstration can be stressful  (particularly when you are new at it),  and that stress may bring about unpleasant mannerisms.

The initial nervousness, you may feel at the start could cause you to,

These are the kind of cues that a Prospect could misread into believing that you are a fast-talking, shifty-eyed, high-pressure type, not to be trusted.

Practice, along with regular self-critiques using videotaping will help alleviate the stress and mannerisms that result from inexperience.

Special note: projecting your enthusiasm by your posture and seating position

Way back, Bob Tuomey, a friend then with Xerox Corporation, taught me a subtle tip: a good sales person sits forward in the chair. That conveys energy and enthusiasm, and in turn may “magnetize” the Prospect to come forward, as well.

You may be tired, but if you want to make the sale, do not make yourself comfortable in that chair.

Synchronicitously, as I was finishing up this e-version of the book, I watched Ken Follett being interviewed on one of the morning programs about his newest book. He sat way forward on the chair, so much so it almost seemed it would roll out beneath him.  But his posture conveyed more than his joy at turning a new creation on the world: it somehow subtly brought the viewer into tune:  “Hey, he’s so charged, so upbeat, this book must really be good! I’ll sit forward in my TV chair  . . .and then go buy the book!”

The center of attention in a demonstration should be on whatever it is that you are showing — which might be your product, or work samples.

In my consulting work, I had the chance to ride along on calls with reps from various organizations. From my notes at that time:

“The other day I attended a demonstration given by an experienced salesperson, someone I had been told was working below potential.  I tried to view it from the Prospect’s point of view.

“The thing that stood out most clearly was the fact that he sat me (as the Prospect) in a chair, then stood in front and lectured like he was a professor and I was his student.

“But he had set up his A-frame on one side of the machine, and he stood on the other side of it.  As a result, I didn’t know whether to look at him,  or at the machine,  or at the A-frame.  My eyes kept looking for a spot to focus, and I missed a lot of what he was saying.”

Compare that with my observation of a different salesperson in action:

“Later,  I attended another demonstration,  this one given by a relatively inexperienced salesperson, but who  already ranked number two in the office.

“The difference was amazing.  This time, I found my attention focused where it should be all the time, and that made me much more comfortable.

“In fact, he was so good at his job that he was able to move me around the machine — to operate the controls and to do other small tasks — without my realizing what he was doing.  His gestures were subtle but clear, and he had me acting as if on subliminal signals.”

The simple matter of where you stand will have a very significant influence on the Prospect and her reactions.

As you know from your own experiences when making sales calls, the desk can be a barrier.  Some Prospects deliberately hide behind their desk, using it as a shelter. For others, the desk is a natural obstacle which they try to overcome.

In any case, so long as the desk stands between you and the Prospect, it usually has the psychological effect of putting the two of you on opposite sides.

Much the same operates in the presentation or demonstration.  If you spend much of the time facing, “lecturing-at”  the Prospect, a psychological barrier may result, and it sets up as ‟me against him (or her).”

The solution is obvious: whenever possible, stand with—that is, beside, not in front of—the Prospect.

If you are demonstrating to a group, try to stand within the group, perhaps walking around, making eye-contact with each member in turn.  Overcome any tendency to lecture at the group.  By standing with the customer or customers, you convey the message, “we’re working together on your problems” — which is in fact what you are doing.

Avoid turning your back on the Prospect. This is a matter of courtesy, (not, as you might think, of self protection)!

Whenever possible stand beside your product or samples.  From this position, you can still maintain eye contact and talk to the Prospect, rather than to the wall behind.

Move in a calm, deliberate manner. Never let yourself become rattled or rushed— if you do, the Prospect may interpret this as a sign that your product is confusing or difficult to operate.

Depending on what you are demonstrating, it may be best if both you and the Prospect stand during the demonstration.  For one thing, she can see your product or samples more in context from a standing position.

Another point: a Prospect who is standing is more likely to become physically involved in your demo, perhaps by touching the product, or viewing samples or performing other small tasks that make him or her at ease with the product.

Sometimes you will need to move the Prospect from one spot to another, perhaps in order to get a better view of the product or  work samples.

Even better, accompany that request with movements in which you lead the way by stepping in the direction in which you want the Prospect to move.

You may also accentuate your action with broad, sweeping arm movements.  Most people will be instinctively drawn along with the flow of movements. 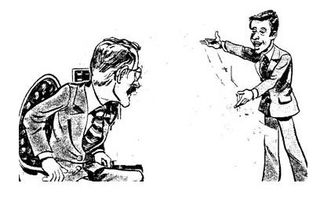 Sometimes you need the customer to move, but, at the same time, you may not want to interrupt the flow of your demonstration.  Or perhaps you have asked the Prospect to move already, and hence may not want to ask again.

In this situation, if you suddenly move backwards, the Prospect will be drawn forward to fill the vacuum you left.

This will be especially effective if you keep talking as you move, and if you then gestured toward some part of your product or samples. (Although this approach may sound almost devious, it works.)

Try experimenting with someone at home or in the office.  Or ask them to try it on you sometime when you’re not expecting it.  You’ll find yourself stepping forward without intending to, as if you were drawn in to fill a vacuum. 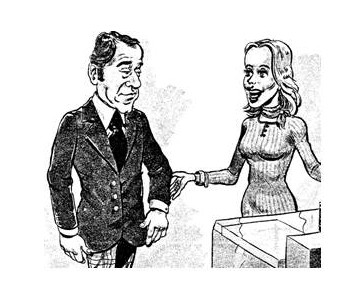 In a  few situations, you can acceptably guide the Prospect by a gentle pressure on the arm just above the elbow.  But caution: some people are very uncomfortable being touched by strangers.

Sometime soon, when no one else is around (so they don’t see you talking to yourself!), set up your video-camera and record some practice sessions as you rehearse what we have covered to this point.

Your objective is two-fold: first, to learn to project smoothness and confidence as you move and speak; second, to self-edit out any distracting mannerisms and speech-patterns.

Here are some items to consider, both in advance, and then later, as you see what worked well and not so well when you watch yourself on the video.

Where you will stand in relation to your product, as well as to the flip-chart, projection screen, or chalk-board.  You don’t want to be in constant motion, moving from one side to the other.  It’s usually best if you stand beside the flip-chart or sample, so you can minimize walking back and forth in front of it.

Also, mentally rehearse how and when you would move the Prospect, using the non-verbal methods above.

Once you are comfortable, try another practice session, again with the video-camera running, though this time with a live person playing the role of the Prospect.  Try to get them to view the video with you, sharing their take on how it went.

Section B.  Decoding non-verbal cues FROM the Prospect

To order Sales Presentations & Demonstrations for immediate E-book delivery, or in paper edition