Why smart people should go into sales -- from Fast Company

If you're thinking of going into sales, if you're already in sales, if you don't know what you want to be when you grow up (no matter your present age!) there's a top-rank article you need to read in the magazine FAST COMPANY.

It's "Why smart people should go into sales," by Andrew Yong, and among his  accomplishments include authorship of the book, SMART PEOPLE SHOULD BUILD THINGS.

I'll leave the article to you, but add that "selling" is not just selling products or services, but it's also persuading, reading body language and other buying signals, pulling out objections  and hesitations, presenting concepts, learning to find and fill needs (needs that often the other person isn't really aware of, so part of "selling" is showing the need and how you can best fill it).  All of these abilities pay off many times over if you move from sales per-se to management, customer service -- even to setting up your own business and marketing your skills, perhaps as  part of career reinvention, or electing for self-employment as your new career option.

Link to article in Fast Company

Amazon has recently upgraded its Kindle software, so what appears on the Kindle comes out  closer to the visual quality and layout of the printed version. 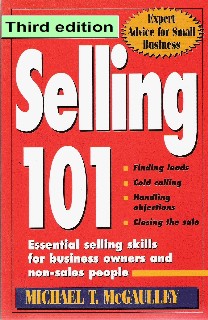 I took advantage of that opportunity, and cleaned up the electronic typography  of SELLING 101, and at the same time entered it in the Amazon Prime program.  Here's the link:  Selling 101: Essential Selling Skills for Entrepreneurs, Consultants, Free Agents

What Amazon Prime means to you as a reader is that you can borrow it free, from Amazon, for however long you want.  As I understand it, if you're  a Prime member, and own any version of Kindle, you can borrow up to 12 books each year.  Only catch, only one book at a time.

And if you borrow a book and find it so indispensable that you just gotta have it? Just "return" it, virtually, buy it, and borrow another.

If just want to buy Selling 101 in e-format, not borrow it, same link gets you there.

New business start-up: "A Start-Up That Automates the Process of Starting Up," says article in NY Times

As I mentioned here recently, this  Selling Face to Face site is aimed at new business start-ups as much as at the sales training needs of experienced sales teams.

In that regard--- new business start-ups and how-to --- here's an interesting link to an article on
Wicked Start   a free site designed by an experienced entrepreneur and management consultant. I haven't personally checked it out yet, just read the article  and looked at the Wicked Start website, but it seems definitely worth your taking a look.

As I understand, when you sign up you get access to a series of how-to checklists and templates to hold your hand through each of the major steps of a new business start-up from scratch.

It's free, so I'm not at all clear on the business model.

Here's the article I read, which came to me via the "Small Business from the New York Times" weekly e-mailing.

"I was a Washington lawyer" --- Washingtonian Magazine

Here's another heartwarming, uplifting story (in Washingtonian magazine) of a lawyer who left the field of First Class travel and lots of dollars in return for lots and lots of billable hours , then reinvented himself into a happier field. "... what I wanted to do all along was tell stories. and play rock n' roll.")

His name? Ron Liebman.  His core point: if you're a practicing lawyer, ". . .to make it work you have to live the job. and if you live the job, there goes the rest of your life. It took me a while to get that."

It took me a while, too. Like him, I (also) was a Washington lawyer. And a New York lawyer. And a Virginia lawyer.  And, to paraphrase the old saying about boats, "The second happiest day of my life was when I finished law school and got admitted to the bar (s), but the happiest day was when I walked away from law and lawyering."

Why am I including this story: because this blog is about (beyond sales) career reinvention, going off on your own, career change, and self-employment as a career opton.

In any case, for more on Ron Liebman and his books

For his article in Washingtonian:  "I was a Washington lawyer"

When I was starting-up on this blog, I expected the main readership would be among new business start-ups, consultants, new free-lancers, people new to selling and sales.  Why? Mainly because the economy was begining to slide down, and a lot of people were going off on their own--- some as involuntary entrepreneurs, others as self- reinventors in advance of getting laid off.

It hasn't been that way, so far as I can tell: most of the readership seems to be professional sales people, folks who already know their way around a sales call, and were looking for fresh ideas.

Yes, that kind of info is here, but also here are a lot of the basics of getting started in sales, or starting up a new venture, finding prospects, and making a convincing case. There are also a lot of free sales training articles drawn from books (Selling 101, How to Sell Face-to-Face Survival Guide, Sales Training Tutorials, and Sales Presentations and Demonstrations.

In any case, for the "reinventors" out there, let me recommend the article, "pulling off the ultimate career makeover" in Fortune, issue of July 4, 2011.   Case studies include,

"Faced with bruised nest eggs and high unemployment rates, older Americans—ever resourceful—are becoming entrepreneurs, " begins this Smart Money article by Anne Tergesen.
The core of the article is a Q and A with  Eric Ries, Entrepreneur in Residence at Harvard Business School, focusing on his forthcoming book, The Lean Startup.
Here is one sample, making a point  that I think is very much on-target with what we speak of in this blog.  Notice how there are elements of making cold calls, using a consultative selling model to find prospects' real needs, and then crafting a brief, focused message making the case of how he can best fill those needs expresssed:

Q: What if you are offering a service, such as carpentry work, and you know there is a market. How can you go about testing whether your business will succeed?

A: I know someone who started a home interior design company. He knew that people would spend money on home refurnishing, but would they want to buy it from him? He spoke to prospective customers, to find out why it was that they wanted to remodel. It turned out that many potential customers in the place where he was based were women. He had the realization that they were not just buying home remodeling, but the sense of control a designer could create for them over their environments. He tried out tag lines for his business until he found a hit—which enabled him to market himself as offering something they could not get elsewhere. The tag line he chose was “unlike your husband, we listen.”

"Never too late to start a business," USA Today

That's the title  of Laura Petrecca's article in USA Today, but actually it's by no means just about "older" Americans: the stats indicate it's "just-plain American" (of all ages) who are starting new businesses, electing self-employment, and otherwise going off on their own as consultants, free-agents, and the like.  Here are some of the key numbers on self-employment from that article:

Your new business venture: getting started

The Wall Street Journal runs a regular section, "Career Journal" --- nowadays often focused on career transition, and getting started in your new life.

"You Just Have to Do It," by regular Alexandra Levit, points out that "people in the midst of a career reinvention

Career transition: After layoff, starting a new business from scratch

Career transition rebounders such as those profiled in a  Business Week article (and the related on-line slideshow) are examples demonstrating that you can leave the corporate nest and go on to successfully "sell your better mousetrap" or yourself. (Not explicitly mentioned is the very real issue of how to sell your newly-rebounded self, or your new venture. No matter: we cover that how-to-sell in this blog.)

The 29 people --- career transition rebounders --- profiled in the video/slide-show include,